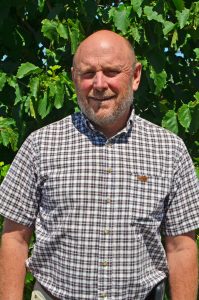 SALT LAKE CITY — The Utah Division of Parks and Recreation is excited to announce that Dave Harris has accepted the role of Deputy Director of Operations for Utah State Parks.

He is filling the position left open after Jeff Rasmussen was appointed from Deputy Director to Division Director back in June 2018.

Harris grew up in the Great Lakes State of Michigan and began his outdoor recreation career as a summer seasonal park ranger. He obtained his Bachelor’s degree in Forestry from Michigan Technical University in 1983.

Since then, Harris has had a diverse career history that includes working as a teacher, directing a boys and girls camp in Maine, and serving a four-year stint in the U.S. Coast Guard.

He eventually found his way to Utah and began his Utah State Parks career as the Ranger-in-Charge at Lake Powell in 1991. He later moved on to the position of Boating Manager. In 2004 he continued to rise through the ranks and was named Boating Program Coordinator for the State of Utah in 2004. Finally, in 2012, he accepted the position of the Utah State Parks North Region Manager.

Harris is expected to be a great fit for the new role, Utah State Parks Director Jeff Rasmussen said.

“Anyone who knows Dave has seen his passion for and dedication to Utah State Parks and employees,” Rasmussen said. “We’re so very excited to have him on our leadership team.”

According to Harris, the past success of Utah State Parks are key to moving forward.

“I look forward to being a part of the administrative team that continues to build off of those successes to see more and better recreational opportunities become available for Utah’s residents and visitors,” Harris said. “I am greatly appreciative of the opportunity to serve Utah State Parks in these new responsibilities.”