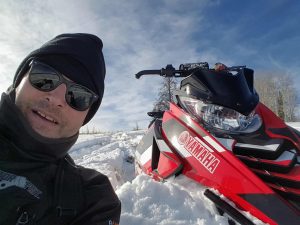 ANYWHERE WITH SNOW, UT — Some people can’t get enough of the outdoors and spend much of their life exploring the hills, forests, and mountains. Then there are those who do all of those things but also work to make them better for everyone. Bill Lahey is one of those people.

Born and raised in New York state, Bill served in the United State Marine Corps from 1979-1983. Following his discharge, he began a career as a phone line and internet cable technician. It was working outside doing this job that fist gave Bill his love for the outdoors.

After traveling around and installing lines all week, he would get off work, hop on his snowmobile, and spend his time exploring New York’s backcountry.

Bill always enjoyed service and spent some time volunteering with the Boy Scouts of America and local churches. When he moved to the beautiful upstate New York, it only made sense for him to begin volunteering with local snowmobile clubs. Here he assisted in maintaining trails and raising funds. 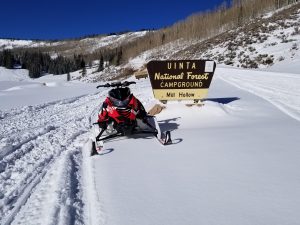 Bill Lahey spreads his love of snowmobiling across the state | CTSY: Bill Lahey

In 2015, chasing his love for the outdoors, Bill moved to Utah. Since then, he has taken full advantage of the state’s beautiful trails and other recreation opportunities. He stays involved in the community and has joined two Utah snowmobile clubs.

Then in 2017 Bill became an official OHV Trail Host through the Utah State Parks OHV Program. These individuals donate their time educating the public on Utah’s 80,000 miles of OHV trails and are a valued part of our community.

He also donates some of his free time to assist in service projects with the Utah State Parks OHV Program and other partners.

Taking his inspiration from the other volunteers around him, Bill said what keeps him coming back is a combination of the team-building atmosphere and knowing the work helps make the trails a better place for everyone. 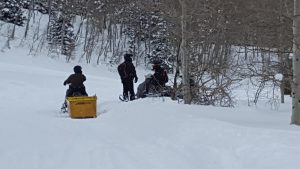 Bill takes his inspiration from other volunteers and enjoys working with others.

To stay motivated, Bill tries to keep an always-moving-forward mentality. Whenever a project or job is completed he is already thinking of doing another.

We asked Bill if he has any personal habits that help propel his willingness to give back. He said it comes down to: not sleeping in; keeping a strong work ethic; and maintaining his equipment.

His favorite Utah project so far was when he assisted in trail brushing and putting up snowmobile signs in the Strawberry Snowmobile Complex in Northern Utah. Moving forward, Bill would love to volunteer in Southern Utah someday to assist with brushing, signage, and trail hosting.

When Bill is not volunteering, you can find him working with Quickfire — a non-toxic fire starter company. Bill is a proud member of both the Utah Snowmobile Association and the Davis County Snowmobile Club.

Thank you for your service Bill, and for your continued support for Utah’s OHV trails.

This volunteer opportunity was made possible through funding and partnership with the Utah BLM, U.S. Forest Service, and Division of Parks and Recreation OHV Program.

Do you know an OHV volunteer who deserves to be highlighted? Are you looking for ways to get involved as a trail host or an OHV volunteer? Email us at ohveducation@utah.gov and we’ll be happy to assist you.