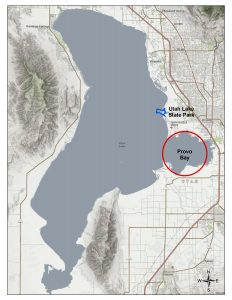 (Utah Dept. of Environmental Quality) – The public, their pets, and other animals are warned to stay out of Utah Lake’s Provo Bay due to the discovery of a blue-green algal bloom. The Utah Department of Environmental Quality’s (DEQ) Division of Water Quality (DWQ) has collected samples and found the presence of algal species that have the potential to produce toxins.

“There are many areas of the lake not currently affected. We want people to safely enjoy Utah Lake but also want to caution visitors about the presence of potentially harmful algal blooms in certain parts of the lake that may pose a health threat,” says Ralph Clegg, Executive Director of Utah County Health Department.

The bloom was first identified in Provo Bay via satellite imagery. The discovery comes a few weeks before the one-year anniversary of the massive algal bloom that shut down Utah Lake last year.

Water Quality crews began collecting samples June 12, 2017, as part of routine monitoring. Follow-up water sample results detected greater than 50,000 cells per milliliter (ml) of water at the mouth of Provo Bay—double the state’s threshold for recreational advisories. In the open waters of Provo Bay, the results were even greater, more than 2.6 million cells/ml. The cell count is an indication of harmful levels of cyanobacteria. Tests confirm the toxin microcystin is present, but at levels below the Environmental Protection Agency’s health-based threshold for recreational waters. DWQ is collecting samples for further testing.

For now, the Utah County Health Department, Utah State Parks and Recreation and DWQ have posted warning signs at Utah State Park near Provo Bay to caution people from recreating in the Bay due to the presence of potentially harmful algal blooms.

Although blue-green algae are a natural part of many freshwater ecosystems, under the right conditions they can proliferate rapidly. High levels of nutrients in the water, combined with warm temperatures, abundant sunlight, and calm water, can promote growth, resulting in extensive blooms. These blooms consist of cyanobacteria (often referred to as blue-green algae), a type of bacteria that pose risks to humans, wildlife, domestic animals, and fish. Symptoms of exposure include headache, fever, diarrhea, abdominal pain, nausea and vomiting, and sometimes allergic-like reactions from skin contact.

For concerns about possible human exposure, call the Utah Poison Control Center at 800-222-1222, or your physician.

DEQ will continue to provide updated information at: habs.utah.gov.